Vet trip resulted in no chip once again and an approximate weight of 80lbs, which I do not believe for one moment. My guess is that the female tech could not manage having him jump upon the scale and remain still enough for accurate weight, based upon his behavior last time with my personal supervision. I explained that the beast's master knows the location of his dog, as well as how to contact me, being that I tagged him with such last year. The girls still wanted to put him up on FB, and I told them under no circumstances were they to do so and have the veterinarian contact me upon arrival tomorrow. Irked me off to no end, and they have no doubt of such at this point in time. Last thing I want is for every joeblow trying to falsely claim the beast.

AND while waiting upon them forever to return from lunch, I actually looked at the beast's collar. He is not wearing a track collar. He is wearing a shock collar. I do not see that he requires one. He just charged the big klepto within his own yard and all is fine. Peefest has just commenced over there.

Edit: and the beast has since returned.

The beast remains for night five.

Retraction: He has proven himself to be extremely fast. He saw a woman with child at 160 yards crossing the field at medium speed to greet them. She picked up her child when she heard me call him and began walking the other direction. I called him back upon arrival, and his speed across the field seriously impressed me, as well as his agility for his stature. He cannot match my lead dog out of the gate, not even close, but once he catches his own pace it might be fairly close. Regardless, if I did not know him, I would be terrified too.

My dog did remind the beast whom happens to be boss, when I tossed the Chuck-it ball. He was seriously teed-off the beast had the audacity to go for his ball and chased him off of it. I felt a bit guilty for it all. Pretty sure my neighbor's klepto golden retriever has since stolen it.

The beast and klepto finally exchanged words yesterday, as soon as klepto attempted to cross the property line. It was brief and simply hierarchical. The beast won that discussion; however, the klepto pushed on in slow defiance toward the deck in order to greet me. All went well.

This evening, they exchanged much harsher words within five feet away from me, as I was gathering dried leaves. The beast won that brief dominance encounter as well, with them breaking apart as I stepped forward with the rake and gave command. However, as the beast was returning back across the field at high speed not 15 minutes later, the klepto was on his own property watching and proceeded to charge at his own high speed, in order to cut off the beast on the very edge of the field, and he was successful, interestingly enough.

It was quite a sight between the two of them, as I awaited result. I had never seen the klepto's clumsy self charge like that before, either. He meant business, and the beast knew it, halting his run directly prior to the encounter. No words were exchanged that time, merely posturing and all was fine thereafter. They are working all out quite well now.

The beast sniffed out the mole tunnels no longer visible from the end of last year and just went to town upon them, coming up empty handed this time. We both now know that they are there on the side of the house and down low. They tunneled there after he departed last year, as well as within my neighbor's side yard, agitating her to no end via their massive destruction. She said that she intended to set out traps for them. No idea whether she did so last year nor managed any of them. I shall eventually make inquiry. Regardless, it's apparent that she did not manage all of them, being that he was intently hot upon the trail of one.

The beast became upset when I climbed the ladder this morning, simply because he felt that he could not follow me but began to try it, causing me to quickly descend. He and klepto exchanged more words this morning but only briefly, when the klepto ventured over here prior to dawn. It's only because I was outside and they are both jealous of one another. Calmly sweet talking each rather quickly resolved their dispute.

The beast along with my two also just charged two tree service personnel working for KU, when they parked in front of the property and exited their truck with inquiry regarding the removal of my trees within the ROW once again. Great job. The men will not do that again, I surmise.

Seven nights and Brewster the Beast appears to have finally gone home this morning, whereupon he was commandeered by his master. I shall locate and contact animal control tomorrow, just in case. He would still be here, if I had delayed departing to purchase some items this morning.

He was not here when I departed. I was gone for two hours. I made inquiry of Klepto's master, whom was outside tending to his garden, before driving the subdivision on recon mission. He said the beast had been upon his property approximately 1.5 hours prior.

That means he returned, after I departed and could not find me nor my dogs, because one went with me while one remained on guard inside the house. I believe that he went in search of me (chases me down the driveway... does not like to be separated from me). I do wonder whether Klepto's master may have run him off.

Inquiry of a few others within the subdivision resulted in no leads. I departed a few hours later and spent time at my father's. It is always possible the beast returned again then, but I doubt it. I do know that one resident put him on the subdivision Facebook page, because she told me so a few days ago when running her lab with her golf cart, and she said that nobody responded. She must have done so before he showed here, because he never left the property, other than to visit Klepto's a few times.

Hopefully the beast escapes again within the near future. I know that he is kept against his will. It was quite apparent that his master tricks him into entering the house and then locks him inside of it, never walking him. The brand name of his shock collar is worn off the device and similar to this one. 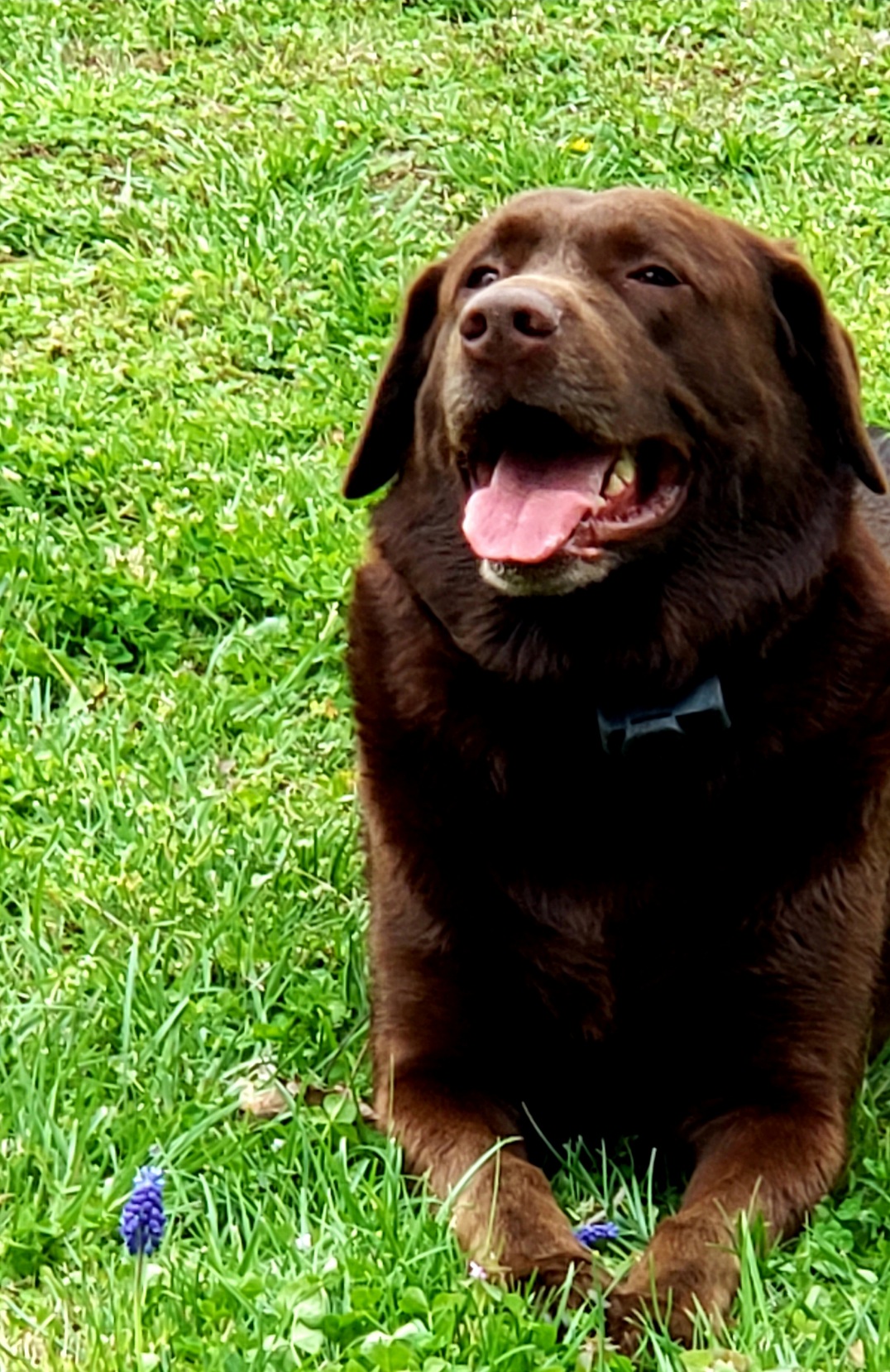 So, Brewster the Beast remained inside with us last night; due to temperatures plummeting to 38°F around daybreak this morning. He has had one break outside and soon to go out for the day with us.

He has put on much weight this past year and is a force to be reckoned with, for it all, even when just petting him. I cannot get him to sit still long enough, in order to potentially determine what is wrong with his foot. He is simply too hyper around me. He has attempted to mount me around five times and taken his frustration out upon two outdoor cushions, thus far, with no harm to them. I would guess that we weight around the same. He puts up a good fight and has to be out-wrestled.

This has become one powerful dog and is in need of much exercise, as well as being placed upon a strict diet and regular teeth brushing routine. He is extremely strong and healthy as an ox, spoiled rotten to boot but follows basic commands. My hope is that I will have better luck outside with his foot. His invisible fence collar is not on him this year, no collar at all. 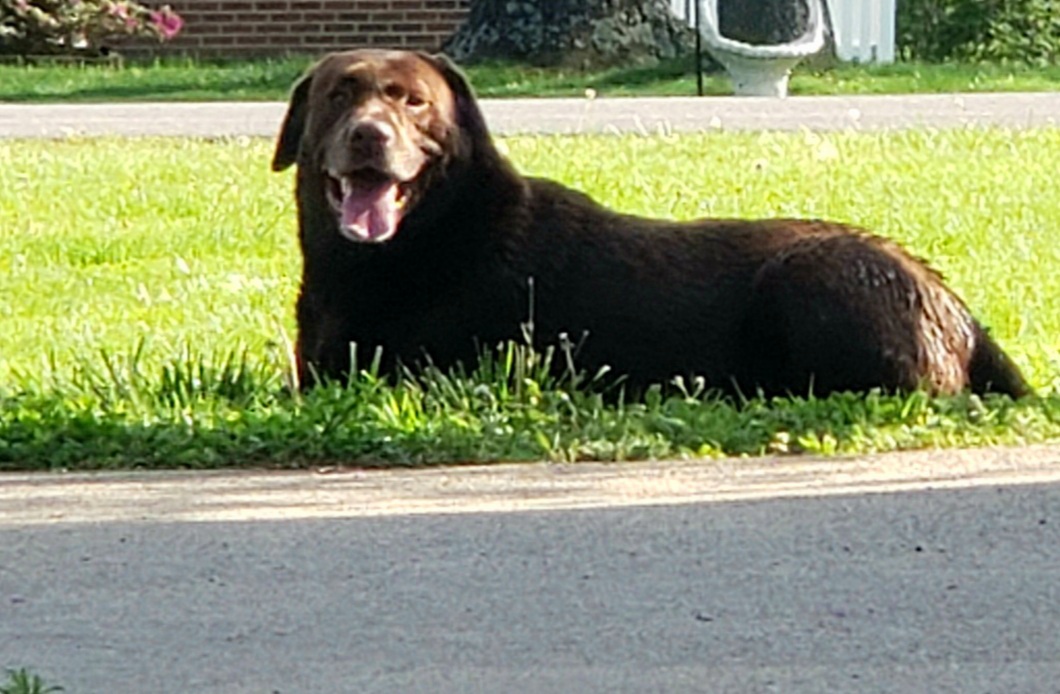 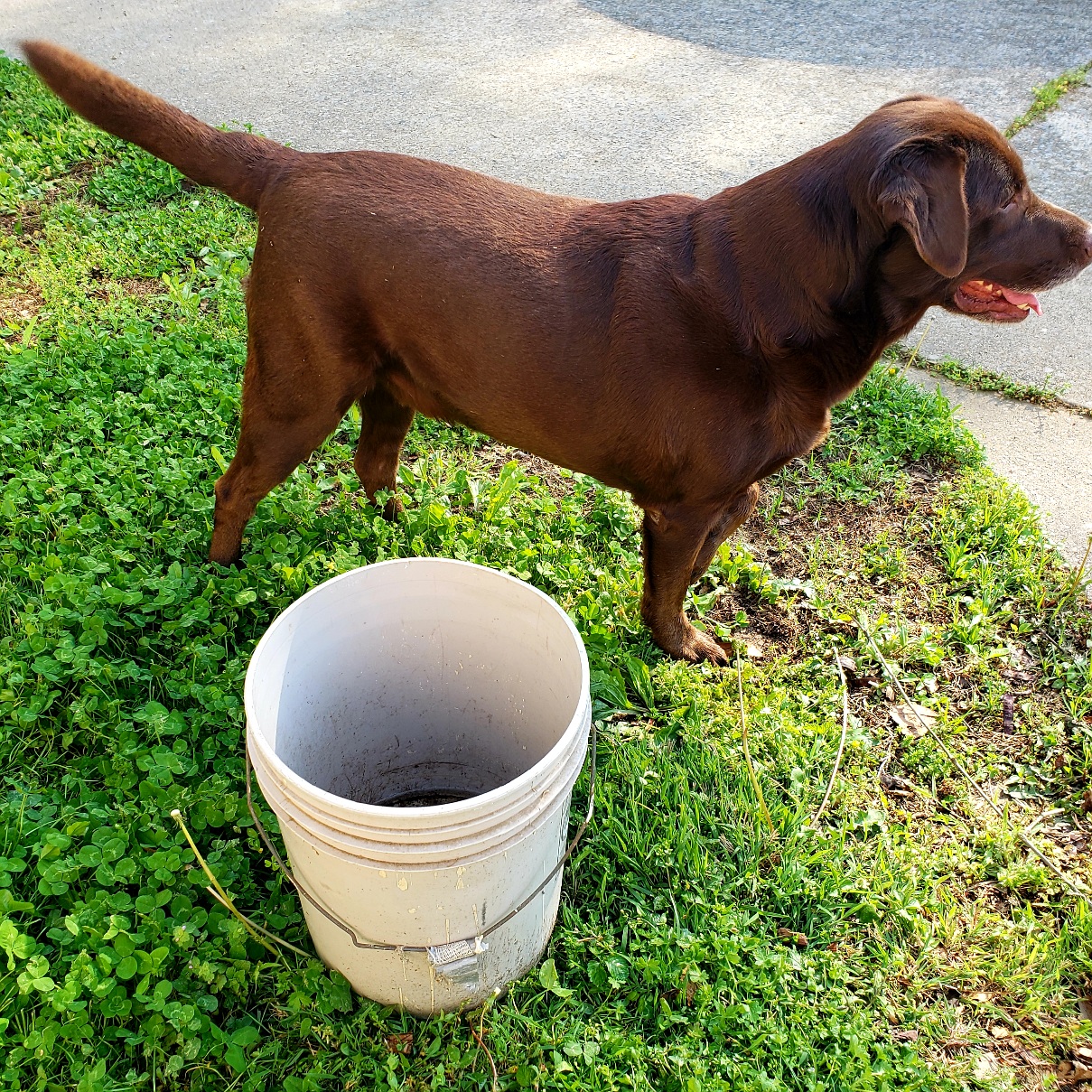 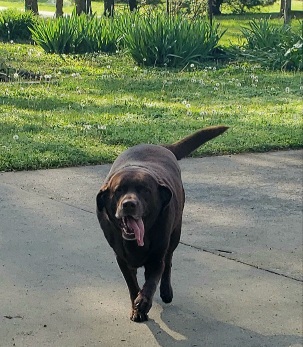 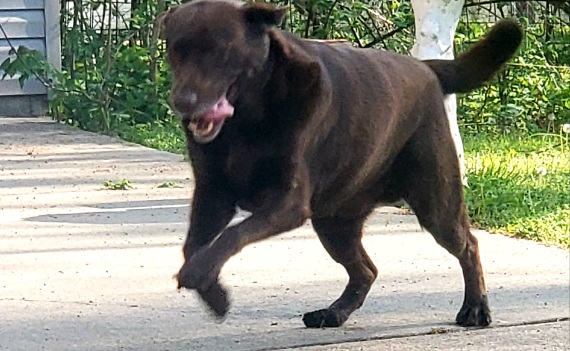 He is a big, silly goofball most of the time.

Jumped out of the car at the little store. Same ole Brewster. Managed to coax him back into it, five minutes and one creek visit later. He never wants to leave my side, until we are in public. 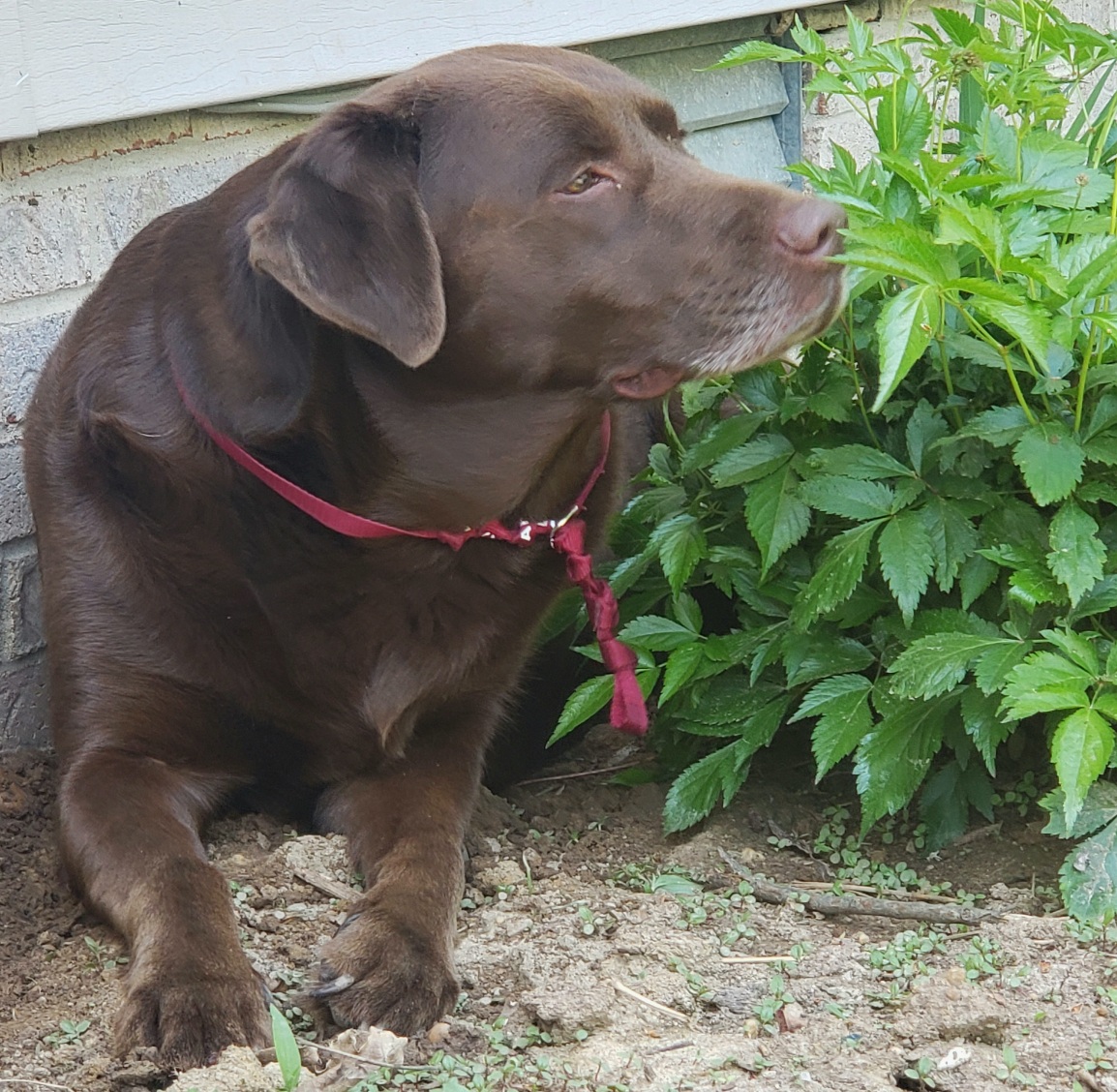 Returned and he began digging near a plant, soon to be transplanted. Next, he smelled it. After that, he attempted to taste it and was called off. 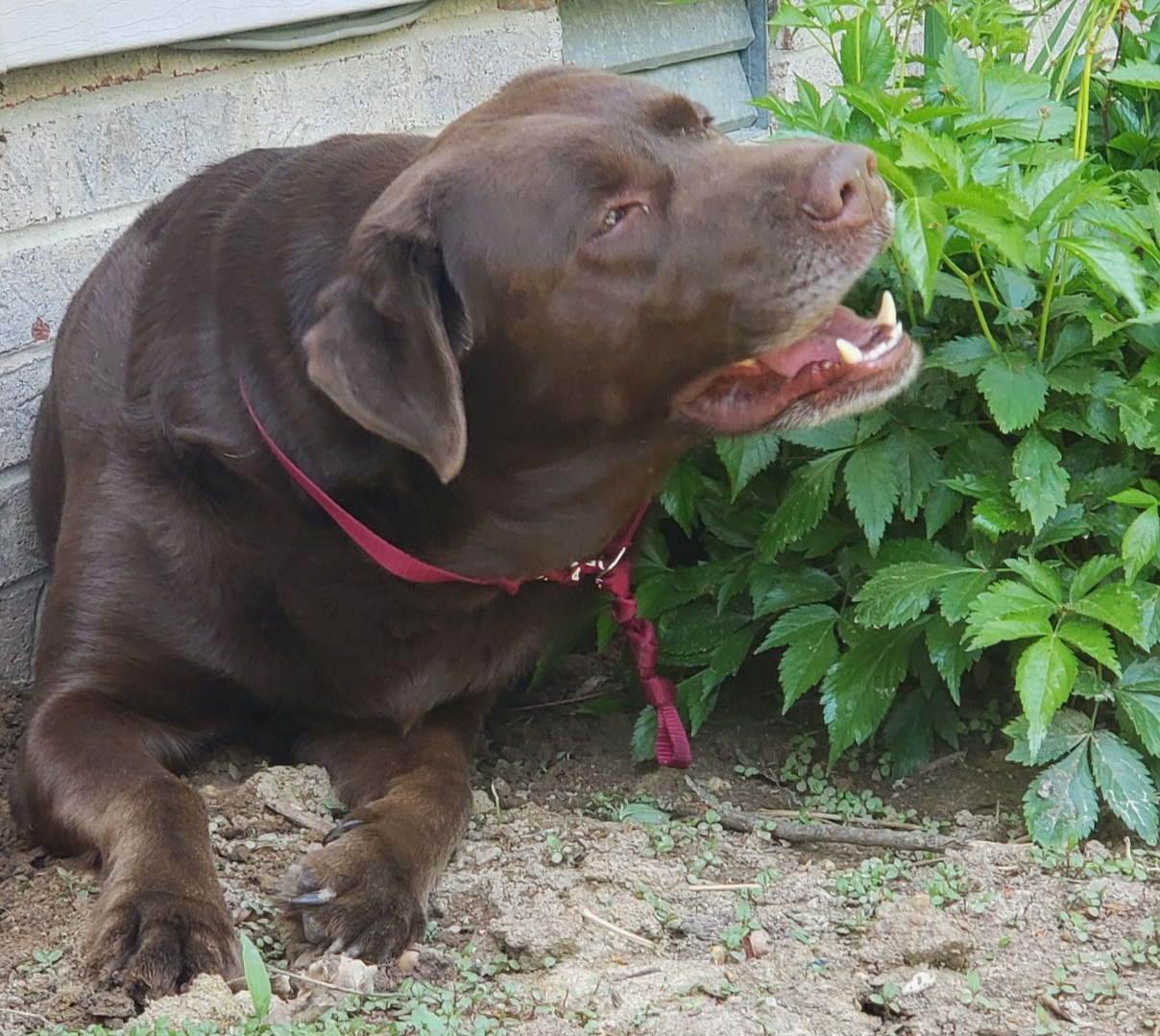 He has already managed to lose the note I had attached to him, via makeshift collar.
Last edited: Apr 27, 2022

Brewster remains amazingly fast out of the gate, even with a problem in his front paw. I may take him to the vet next week. 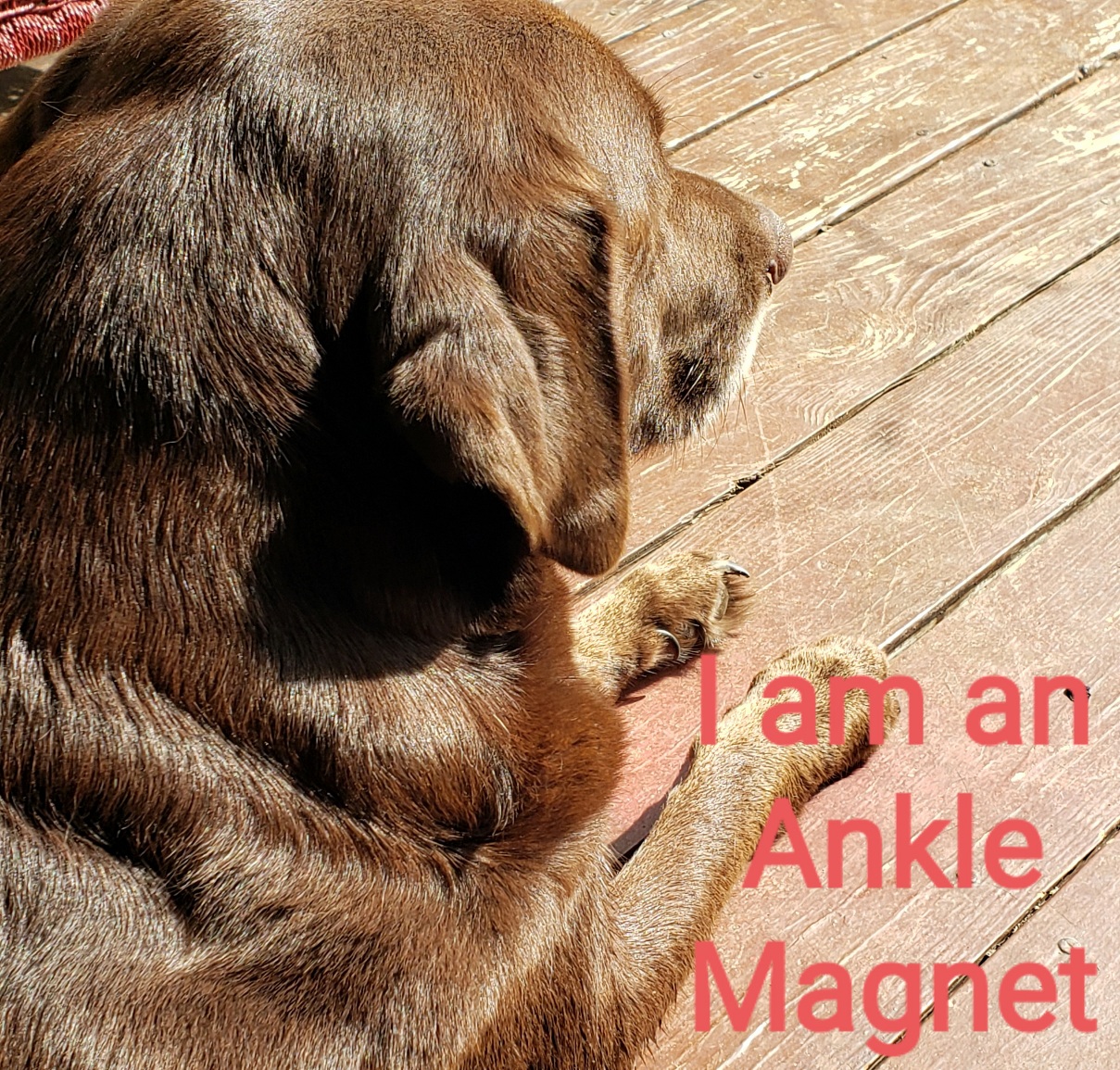 Meanwhile, his highly intelligent self is preventing me from staining the deck, after having already prepped this section. 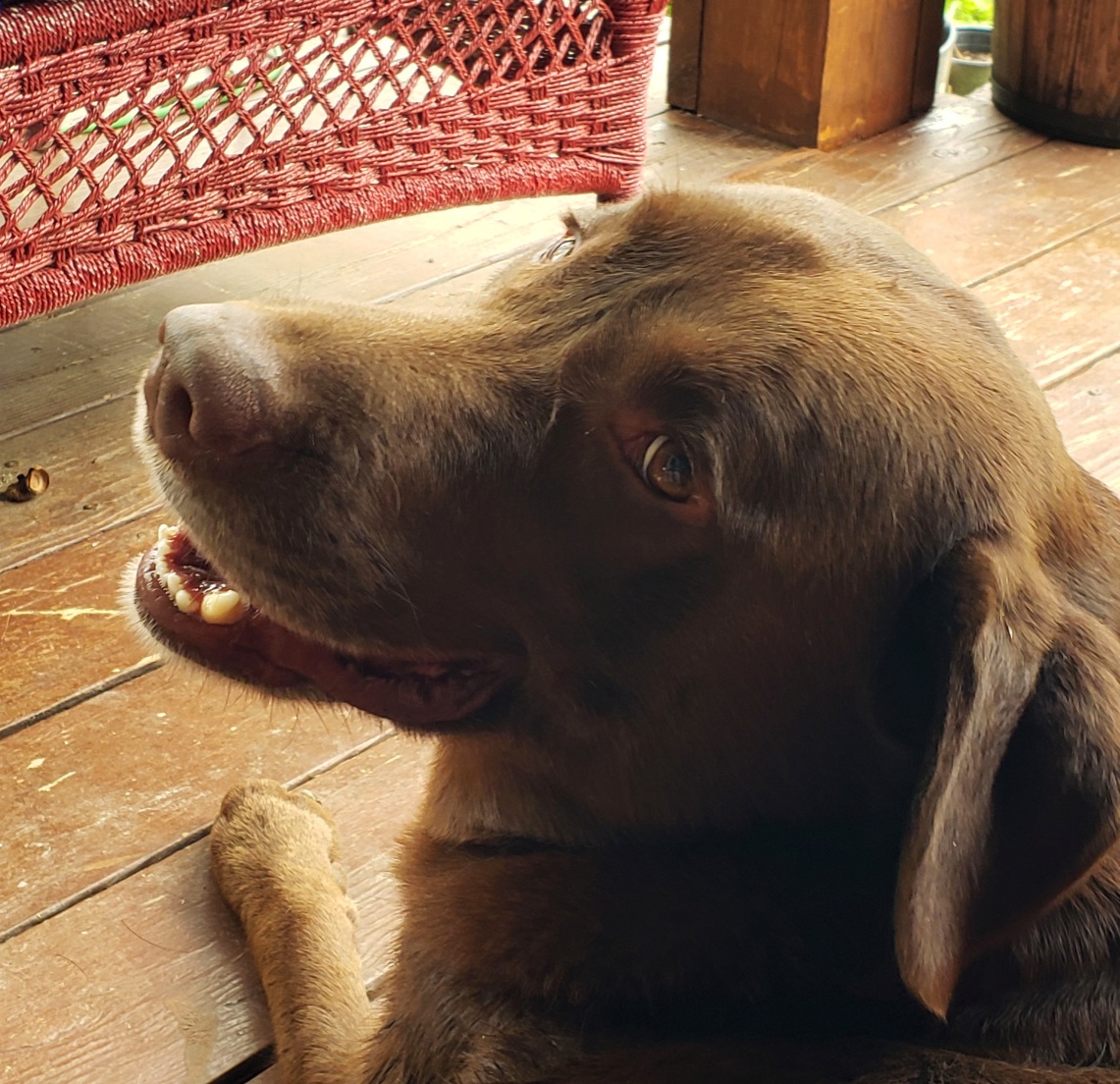 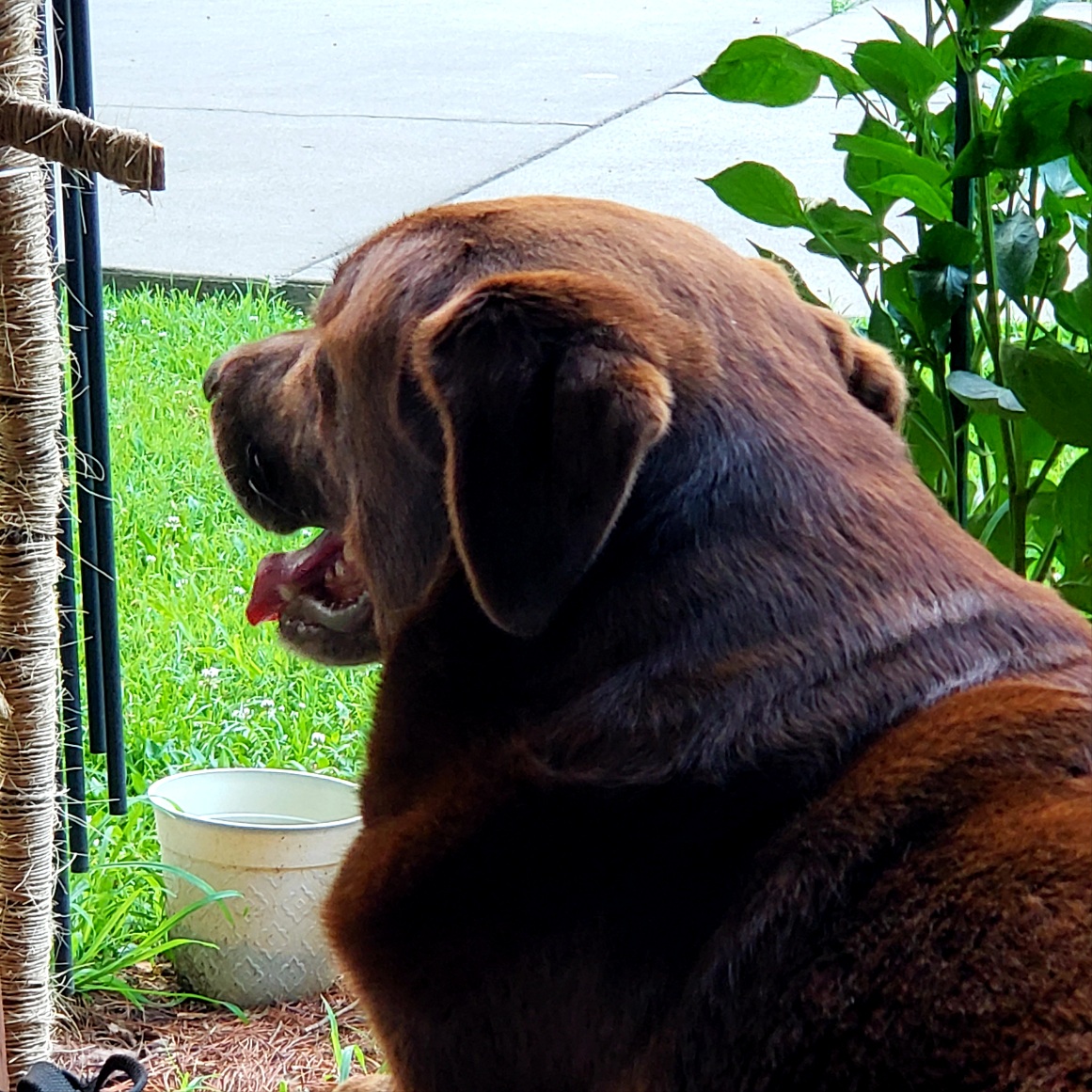 Brewster was asleep here within the hummer garden, sprawled-out upon the deck, as I opened my bedroom door to step outside while still asleep mere moments ago. Always such a pleasant surprise. Was talking about him just yesterday to Sharon down in Florida. She knows him and says that he has yet another foster parent in the back of the subdivision beside the large pond. Foot still bothering him. Will see whether we can make the vet this time, before he wanders yet again. Might be a toenails issue. Was here for 29 days, last hosting event and simply vanished again. That's his way.

Just managed a whiff of what seems to be men's aftershave emanating from him, even though he requires a bath for slight doggie smell after all of the sudden heat. Things that make you go, hmmm. Alyssa lives in the back of s/d and did not recognize him.
Last edited: Jun 15, 2022 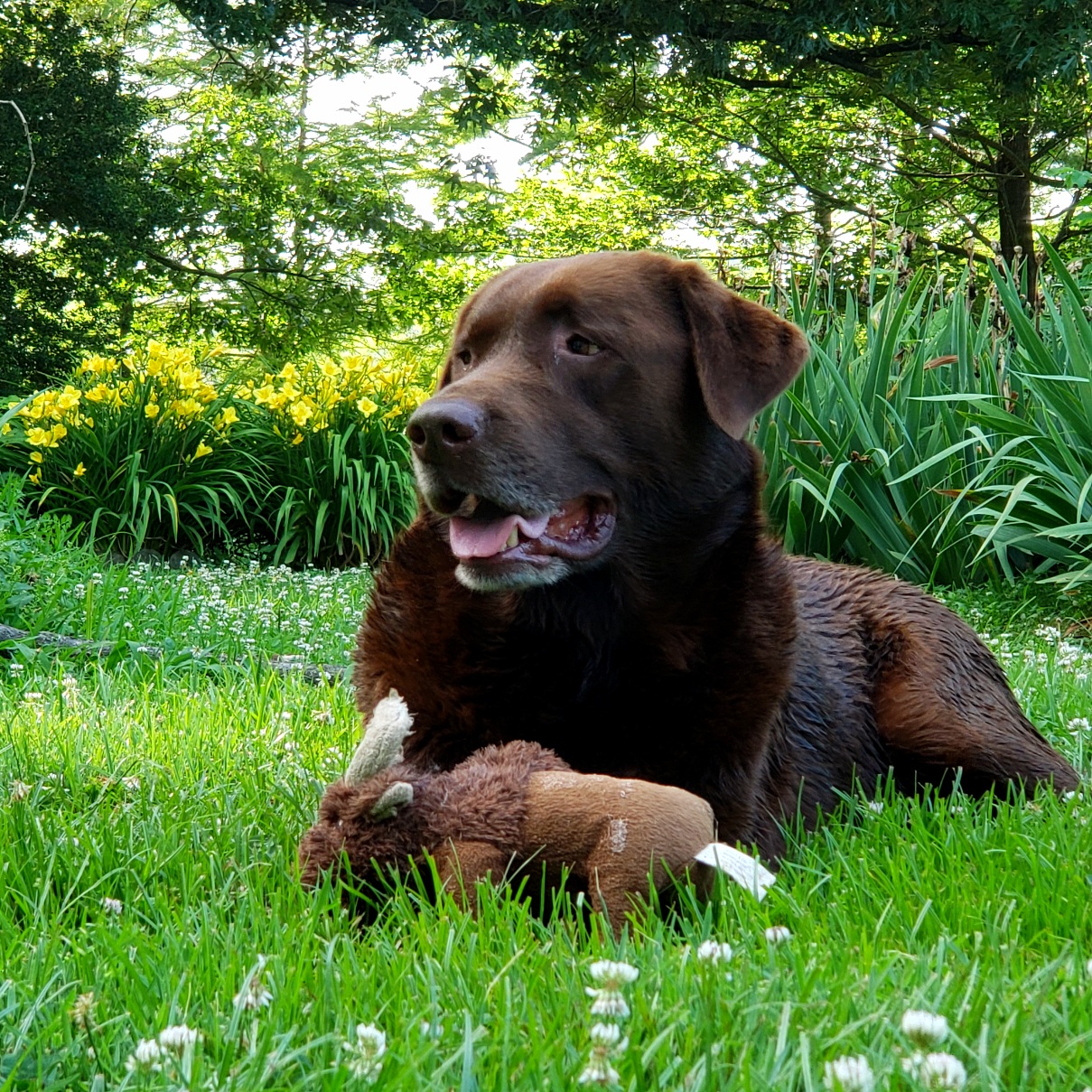 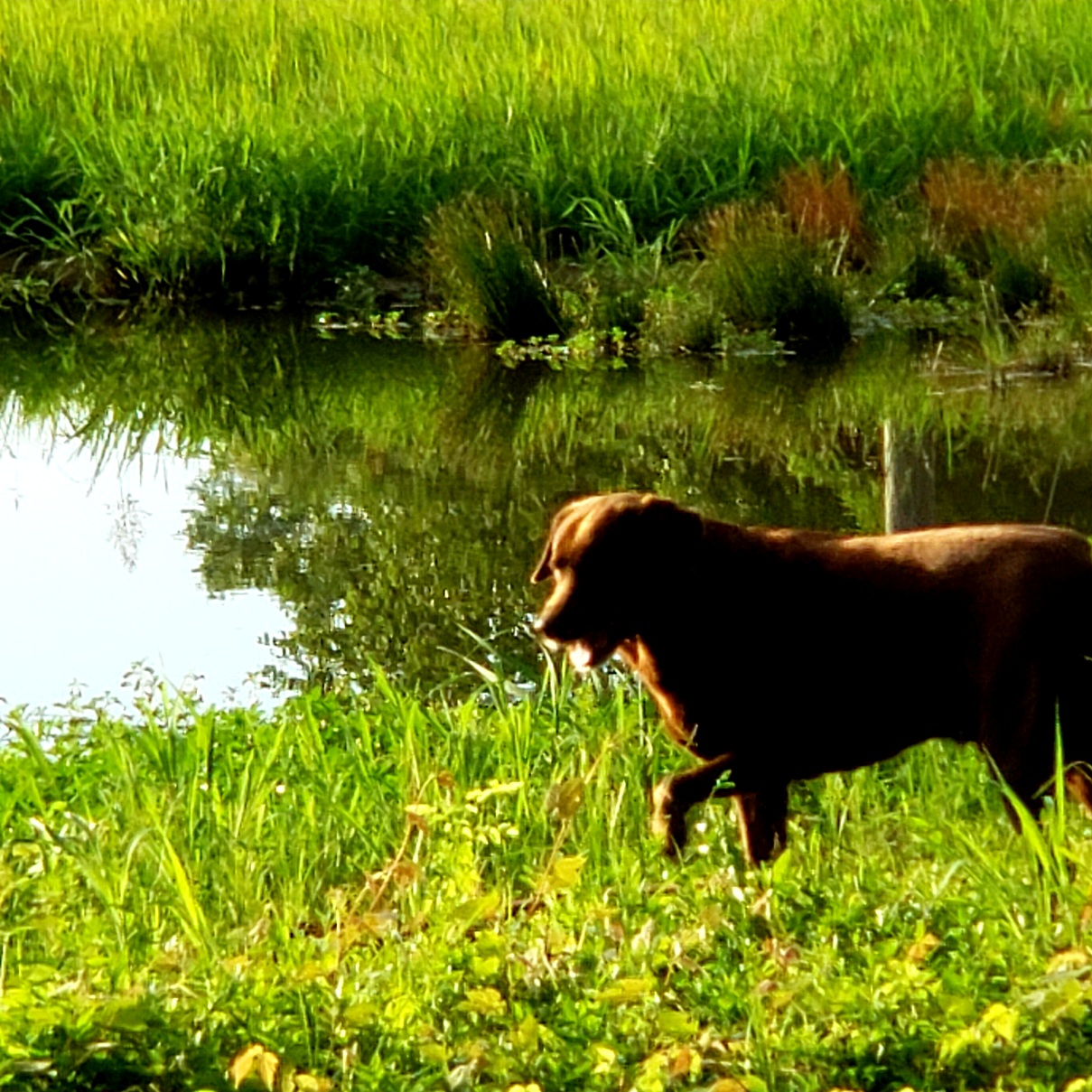 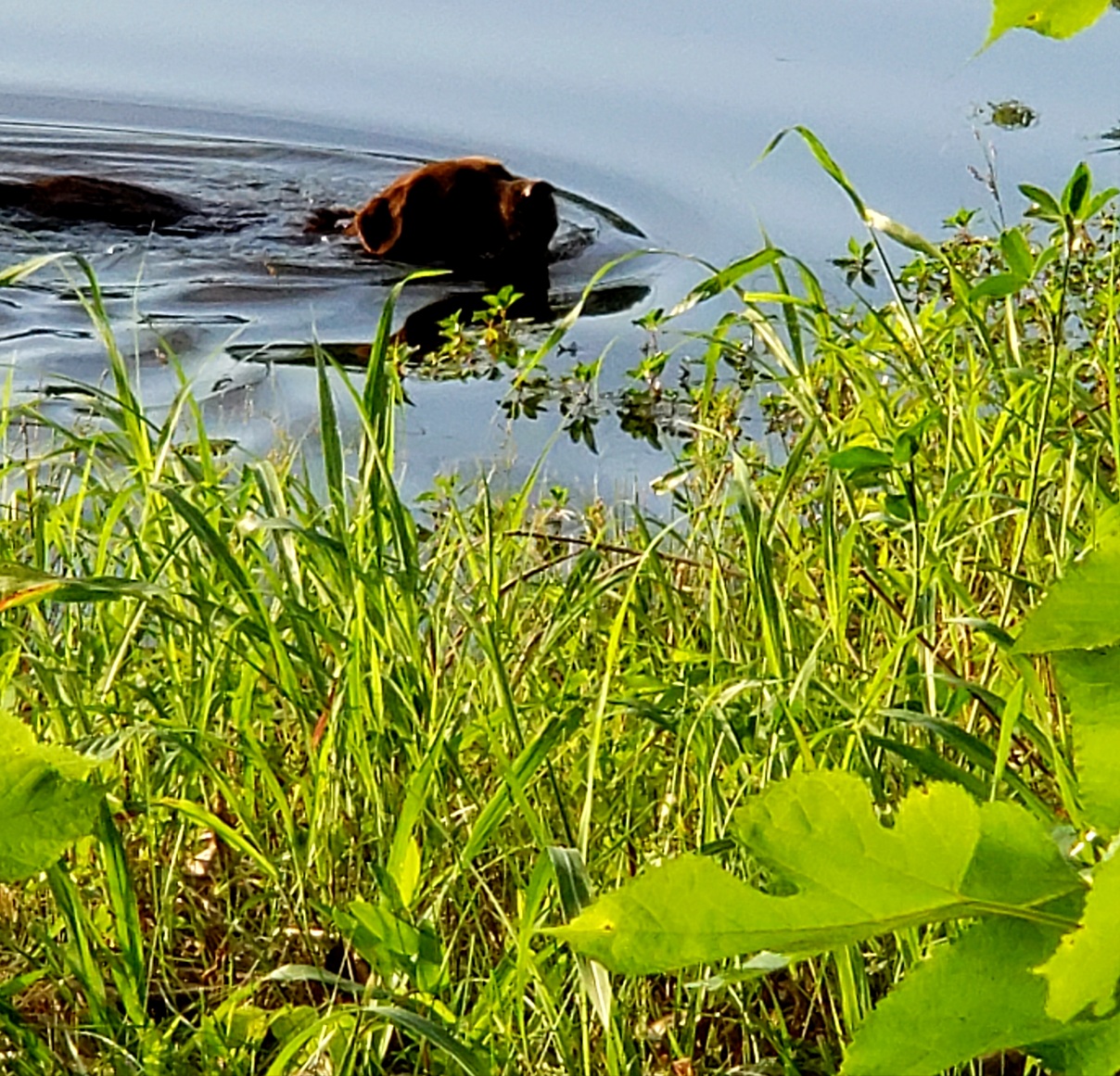 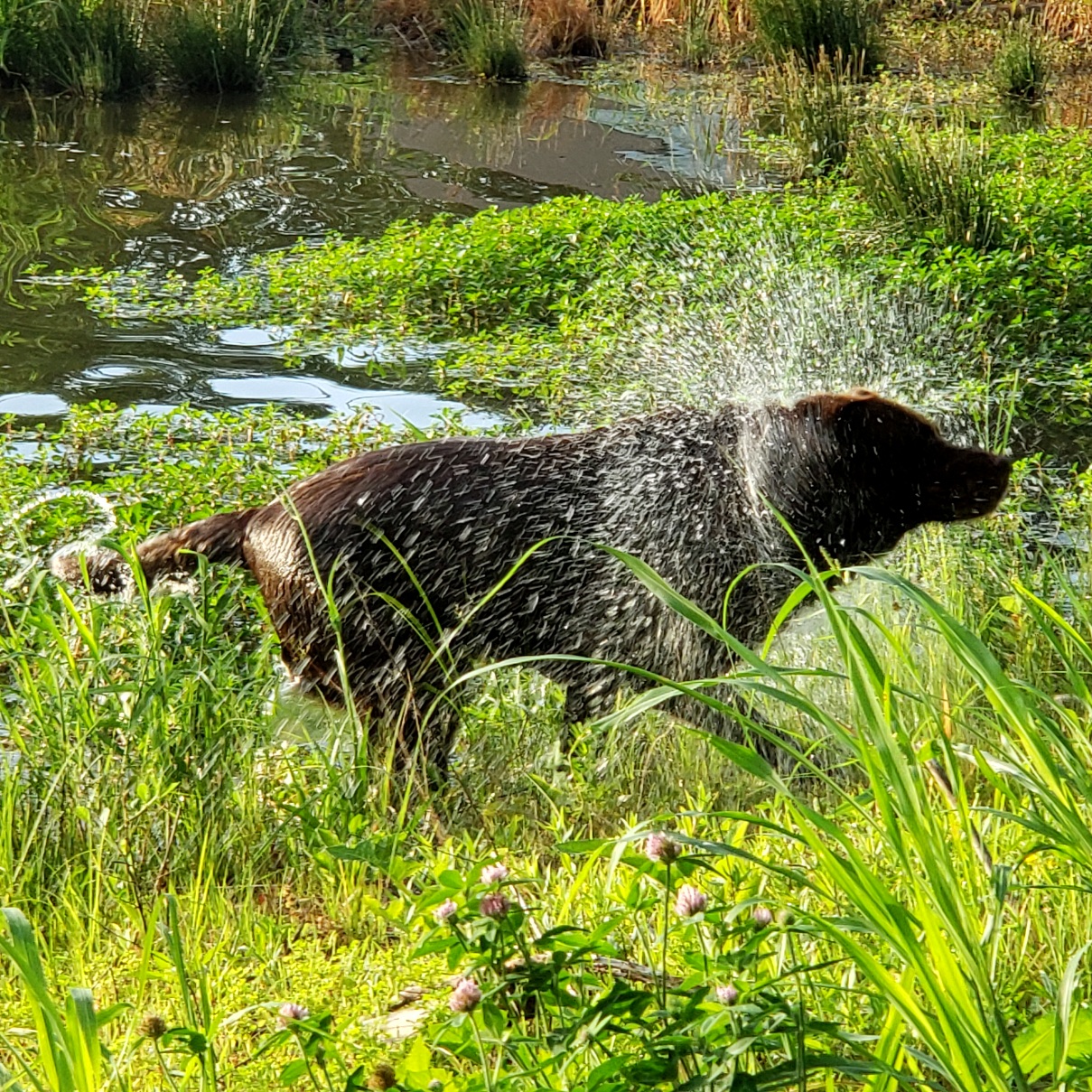 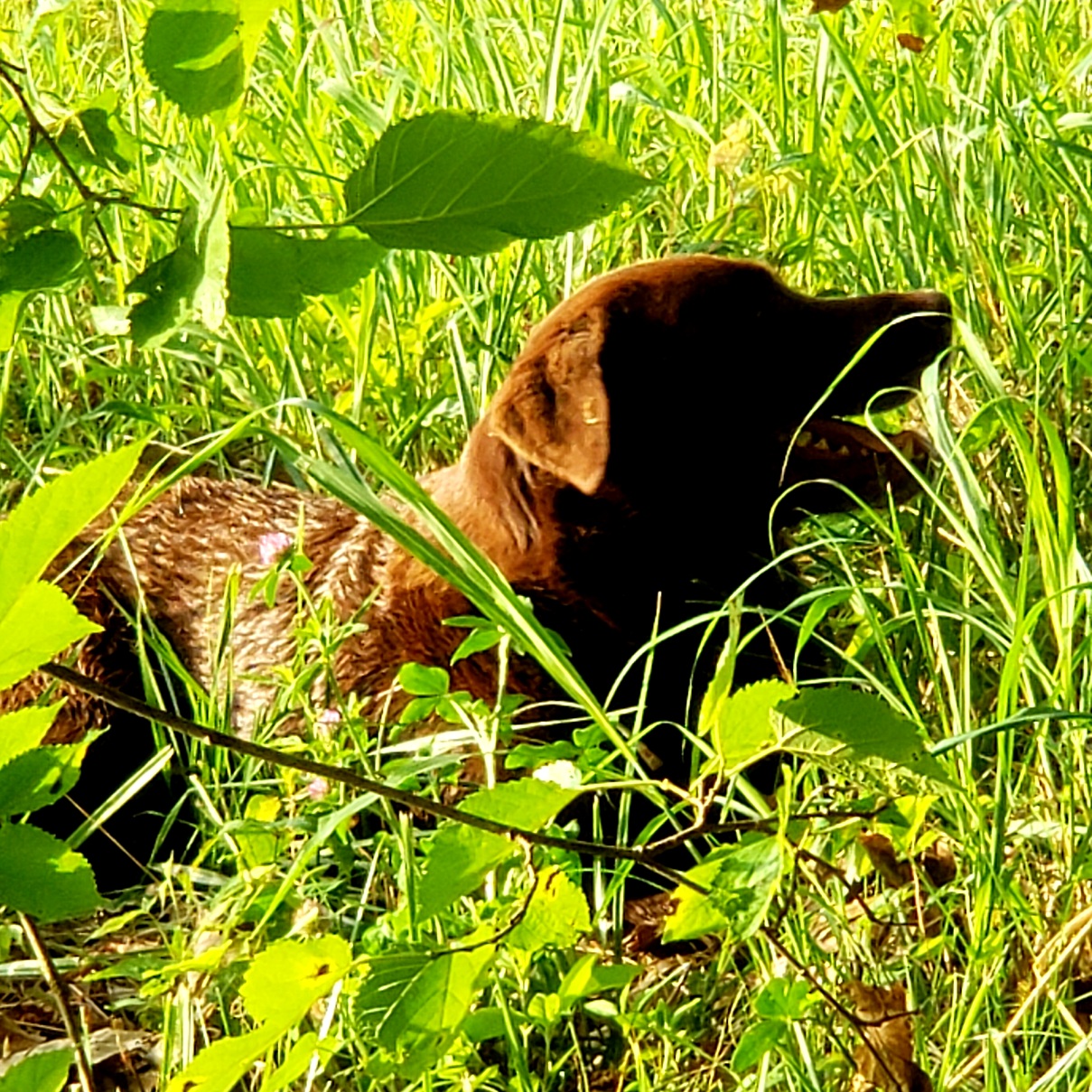 Nimrod mounted me, tackled me anyway and TWICE, while I bent down taking photo of my newly bloomed gladiolus and stained one knee area of new, comfe sweatpants. Such a dufus... 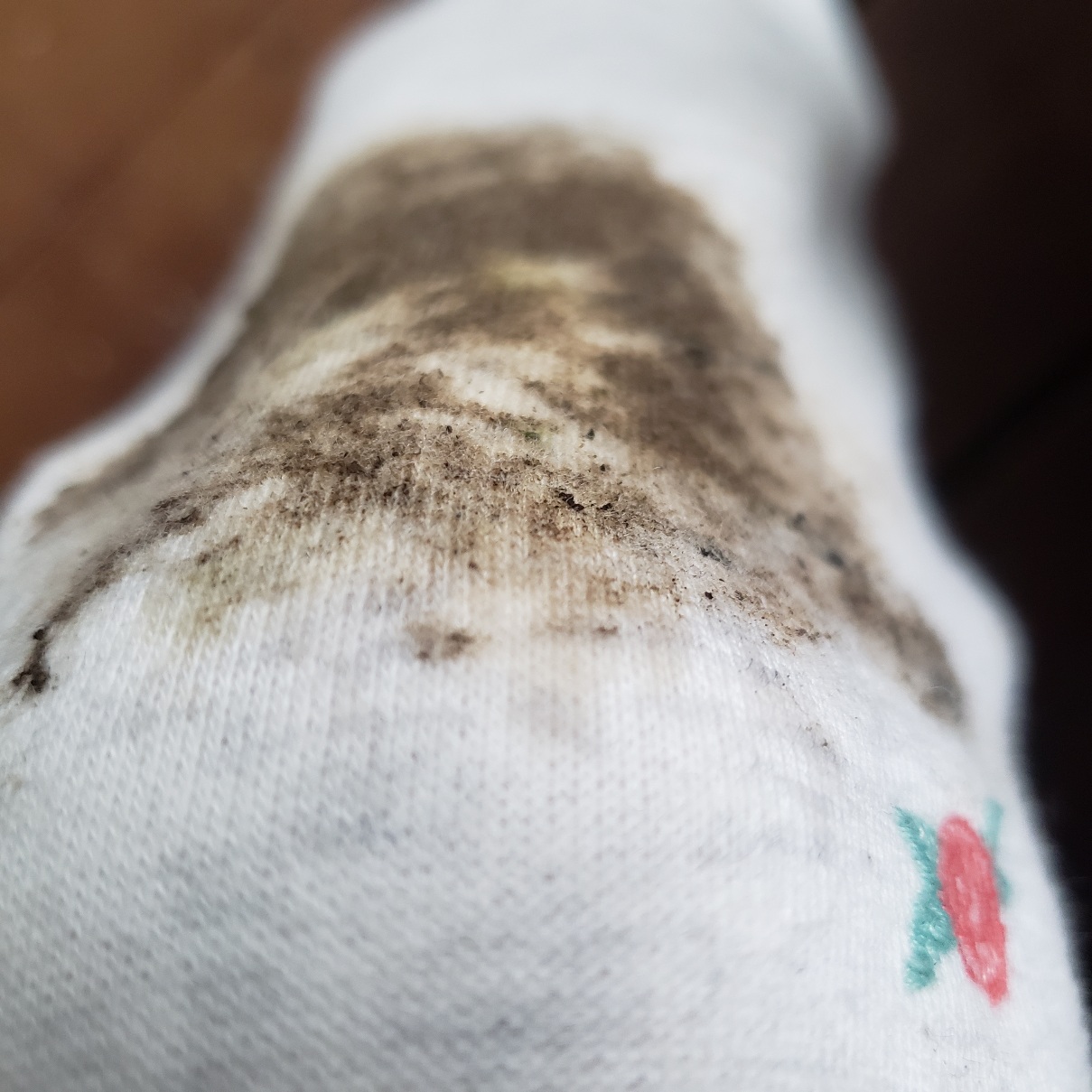 Always laughing when trying to give command in that instance and can't help it; so, he becomes even more hyper. Such a retard.
Last edited: Jun 17, 2022 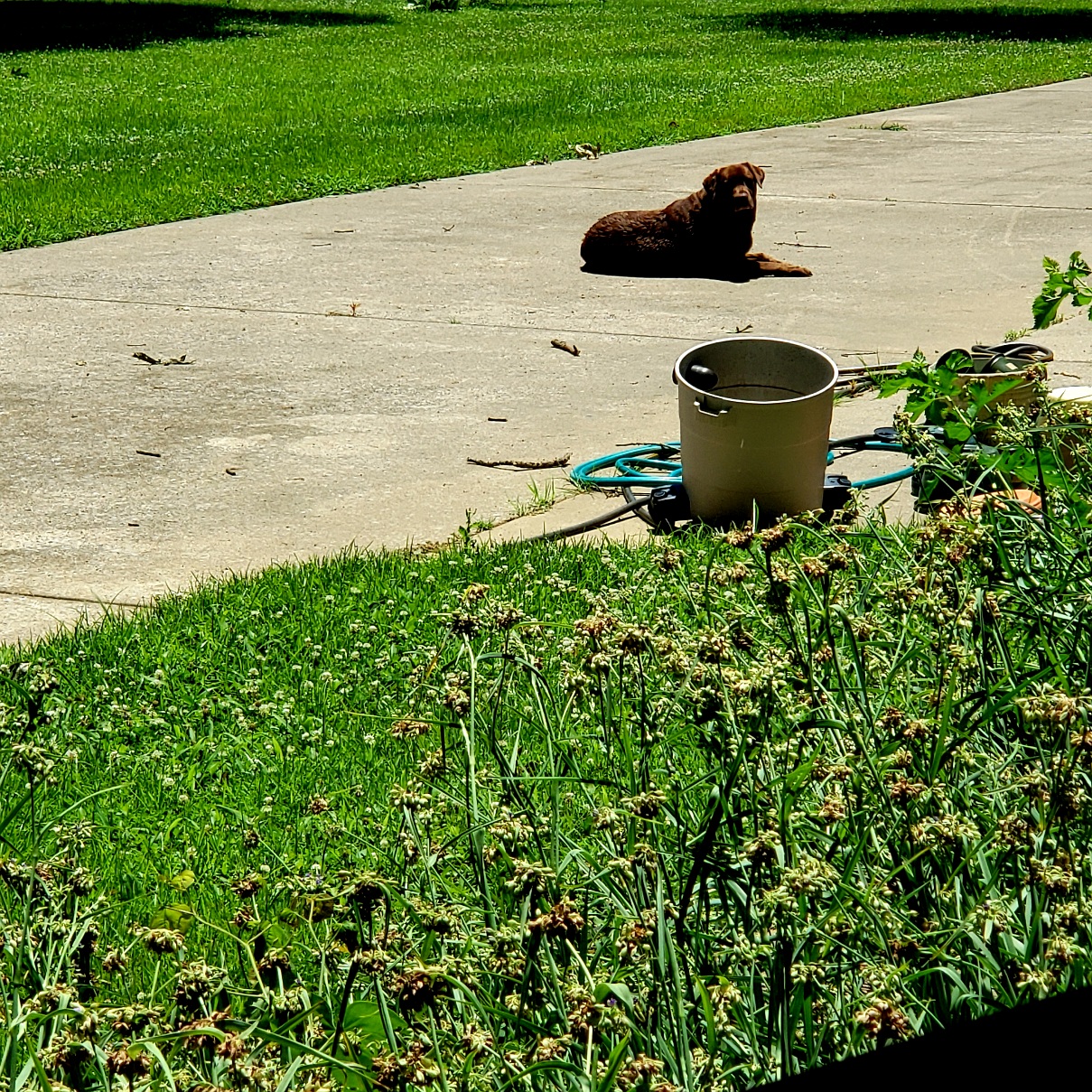 One mole from the very edge of the blackberry jungle down, more to go!

I absolutely love this beast.