They departed their roost moments ago.

Barking away twice since then somewhere to the east just upon the outskirts and stationary.

They are fun to watch! Always impressive when they fly close!

FOWLER2671 said:
They are fun to watch! Always impressive when they fly close!
Click to expand...

They just awakened, roosting somewhere just beyond the subdivision. I hear a rooster and occasionally cattle down that way. All flights typically cross that point. I figure some farmer must have a rather nice pond and more over there, but I have yet to go look. Do intend to do so fairly soon.

Well, nine just flew directly up the driveway from the south, instead of from over there to the east where typically heard. Couldnt miss them. They were just above tree canopies; the big bomber crazy canucks honking away in flight this time.
Last edited: Apr 3, 2021

Goose to the east.

Round 1, many a geese honking away as they fly.

I learned today the fledglings can survive a 25ft fall when leaving the nest. Like a rubber band.. crazy

In a Concrete Submarine

Munson said:
I learned today the fledglings can survive a 25ft fall when leaving the nest. Like a rubber band.. crazy
Click to expand...

Obviously HOL can too....

Bowfinger said:
Obviously HOL can too....
Click to expand...

Psssssst, shhhhhhh, Lord Bowfinger, I'm hunting geese! I just found those cattle to my east (many of them) and saw a man about to exit his driveway; so, I parked the car in the middle of the road, exited and and waved. Frank and I had a nice chat. Uh oh, as I'm typing, here come two geese...off I go.

Munson said:
I learned today the fledglings can survive a 25ft fall when leaving the nest. Like a rubber band.. crazy
Click to expand...

Soooooo, Frank living next to the farmer told me that the rooster I always hear is probably at the house across the street from him, while all the cattle are on a farm behind him. He showed me the precise location of one of three hidden ponds the geese are hanging out at, AND the general direction of the other two ponds, all rather close together. He told me that geese and ducks don't roost in trees, except for maybe wood ducks. Instead, they roost on the water or directly near it; however, I found something to the contrary, stating the crazy Canucks will roost within trees: 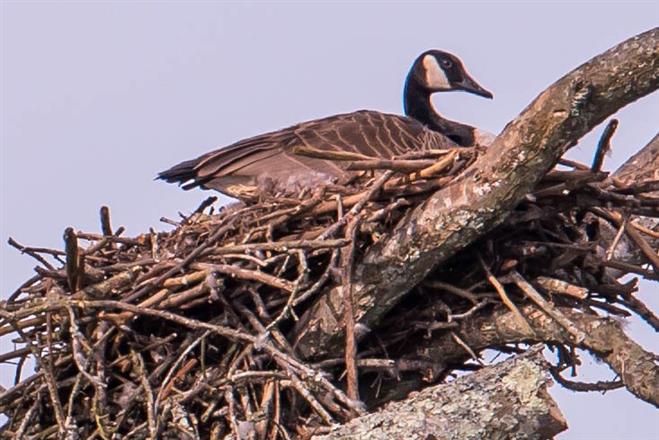 "Barrysprucephotography.com It's rare for a Canada goose to nest in a tree in East Tennessee. This goose nesting in an old osprey nest high in a large tree on a Fort Loudoun Lake island was discovered by Michael Rini of Knox County and documented with this photo by Tennessee nature and wildlife photographer Barry Spruce of Townsend.
––––––– ––––– ––– ––––0
Have you ever seen a pair of Canada geese up in a tree using a nest 25 or 30 feet up in the air?..."

Anyway, I was wearing a dress with no intention of hunting geese this afternoon. I did not even have my camera with me. I had simply whipped around on that road impulsively while in route home today, thinking I might spot the ponds. Due to such, I refrained from sneaking into the field, in order to follow the geese. Next time. I now know where I need to setup for morning shots. Evening will be more difficult.

Frank does not know it yet, but he will be showing me the precise location of the other two hidden ponds. I shall be acquiring permission from whomever to enter, with camera in hand. That's a fact.
Last edited: Apr 6, 2021

HOL,
Get google earth. It will show you the location of the ponds

Houston, we have lift-off. Southbound and honking away!